Today, I will introduce a very important ivory figure ever found of Tang dynasty --- the Bodhisattva Samantabhadra. 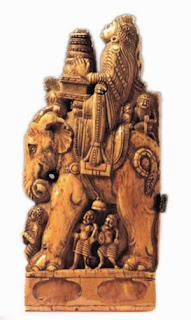 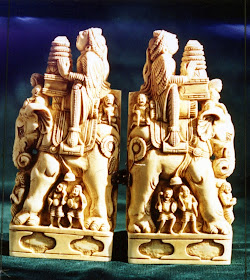 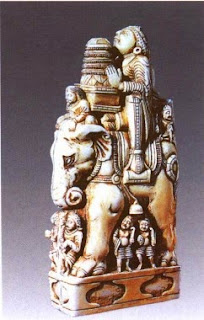 This figure measures 15.9 cm in height and 3.5 cm in thickness and is preserved in Chinese National Museum of History. The outer side of the ivory is an elephant carrying the Bodhisattva Samantabhadra and many other small Buddhist figures. The inner surfaces are divided into compartments containing trinities of images, and forty-five Buddhist stories. The detail in this figure is amazing. There are 279 figures and 12 wagons, which are of different forms. The overall carving has strong Gandhara style of Buddhist art. 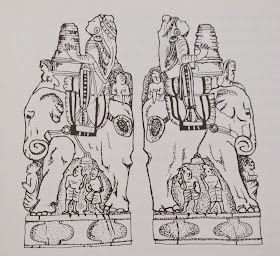 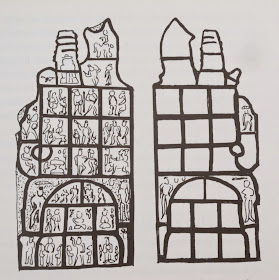 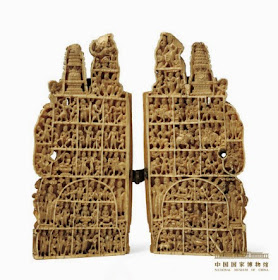 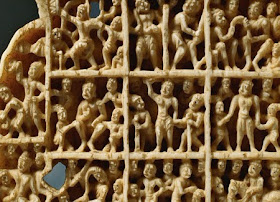 This diptych is proposed to be Chinese work of the late seventh century, possibly manufactured in Chang'an, a copy of an original from the Gandharan-Jibin area in which Chinese elements are included. Features such as the base of the external sculpture and the treatment of the lotus seats for the Buddha images on the interior of the piece point to early Tang China for the date and provenance of the piece. This ivory sculpture is not only the most important and interesting piece of Chinese ivory carving of the Tang period known to us today but it also represents an excellent ivory example of the eclecticism characteristic of most of the arts in the metropolitan areas of early Tang China. However, there is a possibility that this ivory figure was created in India according to other legends about it. And it is a long story... 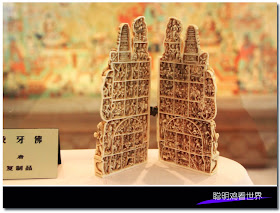 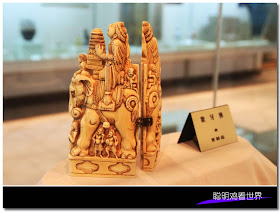 The story of its provenance
This precious ivory figure comes from a small village called Anxi of Gansu province, where we find the famous Yulin Caves. You could see its position in the map. 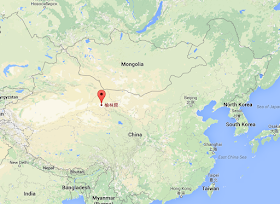 Yulin Caves is a Buddhist cave temple site. The site is located some 100 km east of the oasis town of Dunhuang and the Mogao Caves. It takes its name from the eponymous elm trees lining the Yulin River, which flows through the site and separates the two cliffs from which the caves have been excavated. The forty-two caves house some 250 polychrome statues and 4,200 m2 of wall paintings, dating from the Tang Dynasty to the Yuan Dynasty (seventh to fourteenth centuries).

According to the legend, this ivory figure is a present to Xuanzang (602-664) from the King of India at that time. And Xuanzang left this treasure at the Yulin Caves. It is also said that there exist two figures, which were all carved from the same tusk. The upper solid part was carved into this Samantabhadra figure and was given to Xuanzang. The bottom empty part was also carved into a Bodhisattva figure and was still in India.

For a thousand year nobody has found out this ivory figure. Until the fourth year of Yongzheng emperor, Gendong Wu, the taoist abbot of Yulin Caves, has found this precious ivory treasure when clearing blown sands of a cave. In the late Qing period, the figure was given to the taoist abbot Yuan Yang for keeping and protection. Soon bandits attacked Yulin Caves and threatened Yuan Yang to give out the Samantabhadra figure. Yuan Yang rejected it and was killed. After his death, the ivory was kept by his apprentice Jiaorong Yan. Sadly, several years later, the bandits attacked Yulin Caves again for this figure and killed Jiaorong Yan and another taoist priest. The ivory figure lost its track ever since.

In 1927, a young man called Yuanheng Guo came to Yulin Caves for protection and became a taoist priest. The taoist abbot, Ronggui Ma, told him that the Samantabhadra ivory figure was hidden in the mouth of a dragon sculpture in the main hall. He told Yuanheng that "this ivory figure cannot be taken out to public until the war in China is over". In 1930, Ronggui Ma was also killed for protecting the figure. It was the fourth life cost.

In the May of 1945, the famous painter Daqian Zhang came to Dunhuang and visited Yulin Caves three times for the trace of the ivory Samantabhadra figure. It was said that Daqian Zhang asked Yuanheng Guo several times and offered 2000 silver coins to buy it. But Yuanheng rejected to tell anything about the figure. After Daqian Zhang, the famous calligrapher Youren Yu also visited Yulin Caves for the ivory figure. Once again, he returned with empty hands.

In the spring of 1950, one year after the birth of New China, Yuanheng Guo handed the precious ivory figure of Bodhisattva Samantabhadra to the administration of Xi'an. 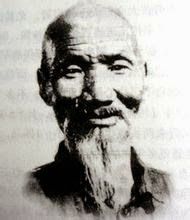