After the Golden Years of ZhenGuan, Tang becomes a very powerful empire. Because of the economic prosperity at that time, China had many exchanges with countries of South/Southeast Asia, such as India, Thailand, Burma, Sumatra, Java, Sri Lanka, in the fields of art, religion and culture. Tang imported a lot of high-quality ivories, rhinoceros horns form these countries. The records also tell us that in the 7th century, the elephant was still plentiful in Ton-king and in the prefectures of Ch'ao-chou, Hui-chou and Lei-chou in China. Thus, the development of ivory carving in Tang Dynasty had a solid material foundation.

Although the ivory carving entered a glorious era, only the upper governmental class can enjoy it at that time.
(1) Figures 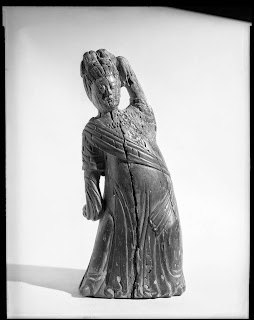 This is a very rare ivory figure of Tang lady with polychrome decoration. Ht. 8 3/4". Dogg Museum of Art. Ex Winthrop collection. The carver ingeniously used the curved shape of ivory to represent a dancing position. The carving style looks very similar to Tang Sancai figures, which gives us a clumsy but graceful feeling. Another reason for this "keep-shape carving" style is to save as much ivory as possible since ivory was considered a very precious material at that time. A particularity of Tang ivory figures is that they are often polychrome. As shown in this next figure, 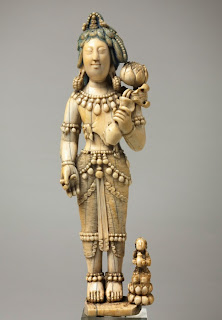 this figure depicts the Bodhisattva Padmapani Lokeshvara.  Ht. 33 cm. Cleveland Museums. This ivory shows traces of polychrome on the hair. It was made in the province of Yunnan, which is close to Nepal. The subject as well as the carving style is clearly influenced by Nepal art. This is a very interesting figure. Its face is relatively "fat", which accords with the aesthetic of Tang dynasty. Its thin body as well as the decorations is close to Nepalese art style. 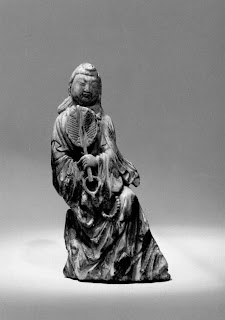 This is a very rare ivory figure of sitted Guanyin with polychrome decoration. Late Tang Dynasty. Metropolitan Museum of Art.
The Bodhisattva Avalokiteśvara, in China Guanyin, an abbreviation of Guanshiyin, the bodhisattva who hears the cries of the World, has appeared to earthly devotees in a variety of manifestations. These have special and appropriate names which are used in divers context: prayers, texts, paintings, prints, oral stories, plays and vernacular fiction. ref [1]

This figure is perhaps the earliest ivory figure of Guanyin we could find. It uses keep-shape carving with plenty of details, the fan, the rosary, etc. Its face is absolutely beautiful and looks like a baby's face.  This piece is typical and helps us understand the beauty through eyes of people living in Tang dynasty.

The art of Tang is remarkable in Chinese art history.