From Zhou dynasty, Chinese government officials began to use a special "notebook" called "Hu" (笏板) when meeting the emperor. Please see the picture below, 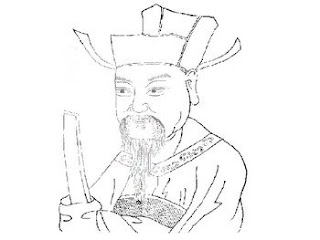 "Hu" is used to note down the key points that an official wants to report to the emperor. It can be made of jade, bamboo or other material and its length is around 30-40 cm. From Old Book of Tang (旧唐书·舆服志), Tang dynasty began to use ivory to make Hu. However, Only officials above the fifth rank could use ivory for their Hu.

We did not yet find any Hu of Tang dynasty. Below, I show two Hu examples of Ming dynasty. 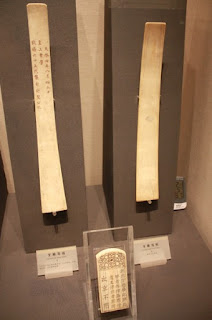 According to Tang Huiyao, in the year of 789 A.D., the emperor Dezong of Tang created a new festival called Zhong He festival (every February the second of the lunar calendar) and established a series of celebrating activities to pray for good harvest of this year. Among these activities, people gave each other rulers as presents. You might be curious why? In fact, according to Six Codes of Tang dynasty (大唐六典·尚署令), during Zhong He festival, Tang royal family gave some very finely carved ivory rulers as presents to their relatives. There are several guesses about its meaning. First guess is that the emperor wanted to encourage the officials to "measure" (or thinking wisely) before making decisions. The second guess is that the emperor wanted to use the same rules to reign the whole nation. The ruler might be considered as a symbole of justice and fairness. Anyway, the tradition of giving rulers as presents during this festival became a custom in the whole country and ever since.

The ivory rulers of Tang dynasty have another name --- "Ba Lou ivory ruler" (拨镂牙尺). "Ba Lou" here refers to the fact that these ivory rulers are tinted red and green etc. with decorative patterns. These special objects reflect the very high level of ivory carving techniques of Tang. There are 11 known Tang ivory rulers in the world. One is stored in Shanghai Museum and the other 10 pieces are stored in Shōsōin in Japan. 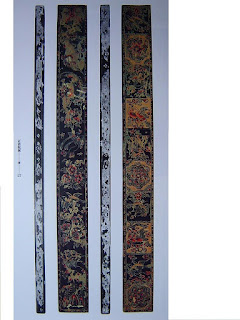 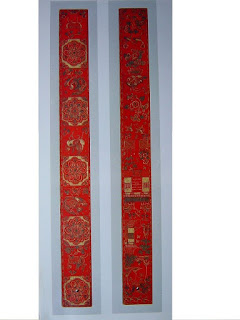 The above two pieces are examples of Tang ivory rulers, which are stored in Shōsōin. The carving as well as the color of them are amazing.

The Chinese treasures in Shōsōin mainly came from Empress Kōmyō after the death of the Emperor Shōmu in 756 A.D. Most of these treasures were brought to Japan by the Japanese missions to imperial China during Tang dynasty.

We show below one other ivory carving of Tang stored in Shōsōin.

This is a tool to play Pipa. As can be seen from the picture, the carving style as well as the tinted colors are very similar to Tang ivory rulers.
Posted by Unknown at 9:46 AM